Tired of constantly being broke and stuck in an unhappy marriage, a young husband decided to solve both problems by taking out a large insurance policy on his wife with himself as the beneficiary and then arranging to have her killed.

A 'friend of a friend' put him in touch with a nefarious dark-side underworld figure who went by the name of 'Artie.' Artie explained to the husband that his going price for snuffing out a spouse was £10,000.

The Husband said he was willing to pay that amount but that he wouldn't have any cash on hand until he could collect his wife's insurance money.  Artie insisted on being paid at least something up front, so the man opened his wallet, displaying the single pound coin that rested inside.
Artie sighed, rolled his eyes and reluctantly agreed to accept the pound as down payment for the dirty deed.

A few days later, Artie followed the man's wife to the local Tesco supermarket. There, he surprised her in the produce department and proceeded to strangle her with his gloved hands.  As the poor unsuspecting woman drew her last breath and slumped to the floor, the manager of the produce department stumbled unexpectedly onto the murder scene.  Unwilling to leave any living witnesses behind, Artie had no choice but to strangle the produce manager as well.

However, unknown to Artie, the entire proceedings were captured by the hidden security cameras and observed by the shop's security guard, who immediately called the police.  Artie was caught and arrested before he could even leave the premises.

Under intense questioning at the police station, Artie revealed the whole sordid plan, including his unusual financial arrangements with the hapless husband who was also quickly arrested.

The next day in the newspaper, the headline declared...

Oh, stop groaning! I don't write this stuff, I receive it from my warped friends and then post it on to you!!!
Mcqueen

Once went to see a band in leeds and during the warm up i told that joke, unfortunatly my cousin turned up with a couple of strange looking ciggie's that i had a few puffs on, Well it took me forever to get it out for laughing, Janet had a few puffs too and ended up on stage giving it rock on

Next day i was really ill and Janet was mortified what she had done,
Happy days 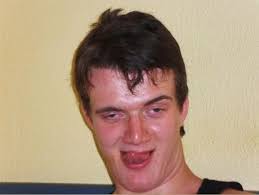 Boy were i ill

Then you weren't doing it right

I never really fancied drugs and wacky baccy. Had a puff a few times but didn't like it too much. Preferred a fag!

One and only time, Great laugh but blady hell the next day,
I rarely remember jokes, but that one

I used to take the odd Moroccan Woodbine but it never did feck all for me. I mustn't have been doing it right either!!

Jan likes sex over the freezer, got barred from 3 Tescos now
Mcqueen

Topdog wrote:Jan likes sex over the freezer, got barred from 3 Tescos now

And then you woke up