Happy Anniversary to the tallest members of this Forum, 8ft 5 inches (one sitting on the others shoulders). Congrats Cam and Tricia, enjoy Skye.

Camping they are, sky is their view at night.
3rdforum

How many years?? Congrats to Mr & Mrs Brodie.

Its their Golden I think, different laws in Scotland. Present a haggis and say Ken ey ave wee lassies hend in weedlock, yeah but wait 2 years until she is 14 please Cam.
Mcqueen

, Them male peckers have a lot to answer for

Hi guys and gals. Thanks for the good wishes! I've just spent half an hour trying to open a hotel complimentary shortbread biscuit! Nearly had all my coffee drunk before I finally got it out the wrapper! I'm sitting on the bed with my laptop but Mermaid is sitting at a table by the window as she doesn't like her laptop on her lap. Hey, we won a gold watch with this place, it's great! I'll put some photos on later in the week. I thought because we got a cheap deal through "Easy-Breaks", we'd get thrown in a wee backroom overlooking the sewage works or something... but no, we have a front room on the 1st floor with a view down the loch to the Cuillin mountains! The room is huge with a 32" TV which I won't be switching on anyway, trouser press, hair dryer, telephone on bedside cabinet, the works!(Mermaid is going to nick all the complimentary toiletries in the bathroom, there's loads of stuff from after shave to shampoo and conditioner all in wee bottles and wee wrapped bars of soap. I think there's a bit of gypsy in her...). Wait 'til you see the photos, the curtains in the foyer have sporrans as tie-backs! The lounge has a big blazing open log fire, lovely and warm, and there are two bars with restaurants attached. (Same bloody kitchen though but one is twice as expensive as the other one). Tomorrow night we are going to see a female group called "The Shee", if my Gaelic is correct that means "The Fairy people". They are 6 females who do Folk/Celtic?Bluegrass. £10 a ticket isn't bad 5 rows from the front. Plus it gets dark earlier up here so it'll give us something to look forward to. Thinking of doing a wee bit of hill-walking tomorrow if I can to the "Quirang", as it isn't far from where we are staying. I'm hoping Mermaid can do it too, but I'll wait until I've seen the route before dragging her up it! More to come on this subject tomorrow!

thank you all for the wishes. It is 31 yrs we have been wed.

thank you from me

no she didn't.We got cards before we left

Here is the 6 girl band we went to see in Portree called The Shee, this
is one of the songs off their new album "Murmurations" called "Our
Bottle"...

It was a nice concert

Sorry but I had to switch it off at 56 seconds. Eyelids were getting heavy. Congrats on your anniversary anyway.

Train robbers only got 30 years you know. Is that a Spitfire on her necklace?

Perfectspecimen wrote:Sorry but I had to switch it off at 56 seconds. Eyelids were getting heavy. Congrats on your anniversary anyway.

Train robbers only got 30 years you know. Is that a Spitfire on her necklace?

Wheesht! I bought Mermaid one of those, cost me £35!

It's a starling. The album is called "Murmuration", as in a "murmuration of starlings". Collective noun innit...The lead singer also makes jewellery. They have 2,000 CDs and each cover is different from the others... 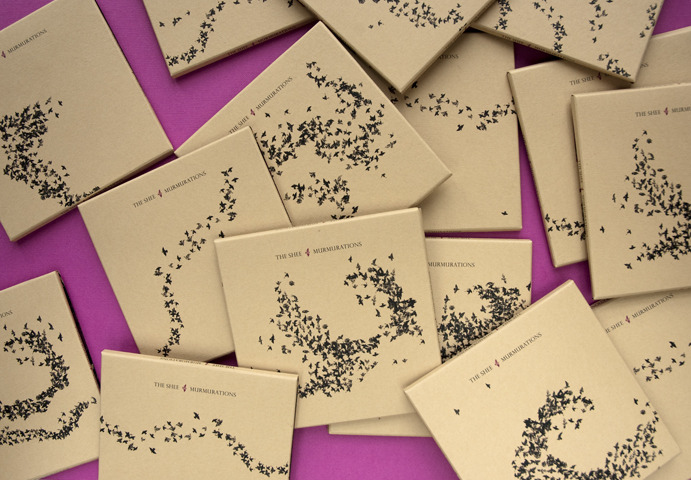 All info on this forum is free...

A bird on a bird then.

Nice harmonies but found her hard work so stuck it on YouTube so I could listen without watching.
Campbell Brodie

It was better when they went from the monochrome to the colour with stereo sound. Don't know why they did that, it didn't do them any favours. Listening to it live was really cool though as the lead singer has a great voice.

LR has played it many times today.