You have a PM Kev.

Just found out hes over here.

YES I was and delayed 20 hours with Norwegian. I got the bit to do with the crash landing a TFS but the way Norwegian treated us was dreadful. They cancelled our flight at 11.15 pm even though the inbound plane to take us back was already 2 hours in flight, then they took another 2 hours to let us know that we had to go to gate 1 and be taken back through passport control. We then had to meet at the desk where two other flights were, one for Madrid and the other New York, which had also been cancelled. They said we do not have any hotels available,  not surprising as they were trying a block booking for 890 people. I asked the question about trying smaller block bookings at least getting the families and infirm (like Reg and Vince) a room for the night. We were told now 1.20 am to try bonking.com and Norwegian would (yes I know its booking.com, check yer sheets and mattress), reinburse the hotel and travel to and from. Excuse Mr Jumped up, do as yer fecking told you bar steward travellers, will that be in the morning, just these families might be on a budget as some of the younger people and may not be able to wait 6 weeks for Norwegian to say we are looking in to your claim, "sorry sir, its the only option open to you.". Me, no not me personally but a bit pissed off as if you had given us information sooner I could have go a train for 8 quid and got a bed for the night.
So we are then told that the Tenerife plane would not be going until 13.35 next day, which quickly changed to boarding gate at 13.35 taking off at 14.25......why is that then, because we have to wait for clearance. Is that like the crew being cleared through passport control. Anyhow vouchers available 12.50 for breakfast and 12.50 for lunch, cheapest thing on lunch menu at wetherspoons, cheapest place in airport was a burger 11.95, leaving 55p for a drink. Breakfast 7.95 or 9.95 and 2.55 fr coffee.
Then to departure gate, hey ho we are boarding on time, 14.00, or maybe not......everyone called forward and then 14.45 still standing in queue and no staff. I got on the phone and asked if the staff would be arriving to board us or if they would like to send security and a riot squad as it was getting quite heated, everyone accepted what had gone on in Tenerife and were really very good. Anyway, two mins later someone arrived, no by as you leave, just boarded us, then doors closed on plane and we sat there for 45 mins, Captain said we are waiting for refreshments, have they not had since 2.25am to load them then. He then said there would be no alcohol on board, of course not just in case eh. We then got the spill about the plane delay not being Norwegians fault and despite it landing at 2.25 am the crew had passed their time and had to....wait for it..........go to a hotel for the night. Oh rub it in fecker. Oh and we could not fly anyway as Gatwick were working to rule on refeulling, liar, they were refeulling all night and also I google it and no work to rule at Gatwick. So Norwanking may be comfortable but they have no customer service ability and basically do not give a shit. got back to Tenerife at 8.20pm on the Wednesday
Mcqueen

and all because a Yorkie loves JET2
Mcqueen

Topdog wrote:and all because a Yorkie loves JET2

If you're delayed by more than three hours or your flight's cancelled, under EU rule 261/2004 you are entitled to between £110 and £520 in compensation person.

We got £1600 + when our Ba flight was delayed 6 hours, then 3 hours last year - it is easy just sent the airline an email I used this site Resolver they don´t charge and the money was in my bank inside a week.

But of course it is EU law so better get in quick before Brexit or you'll get nowt.
Adam Mint

So what happend TFS...
Campbell Brodie

Thanks Gypsy, took two years and many times being refused from Thomas cook but eventually they paid. I have done the form for Norwegian, I have been told they refuse everyone, so a battle maybe.
Perfectspecimen

I'm back again. I too got held up by the TFS 'crash landing'. In my case we were already on the plane waiting to taxi. The captain came out of his cabin to talk to us and kept us informed but the promised refreshments never arrived. In the end we were on our way after a couple of hours. Decided in the end to wait for Kevs plane to arrive. Said on the board 4.20 am, then about 3 it changed to 6.20 am, then it just dissapeared completely off the board.

There were bodies sleeping all over the airport but I dont do laying on floors so I stayed awake. Now I know what it feels like to be homeless nomad.

Vince you were happy, bar at airport open all night.
Adam Mint

Ain't seen anything in news about it...
Campbell Brodie

You weren't looking hard enough, it was on the Beeb site a couple of days ago... 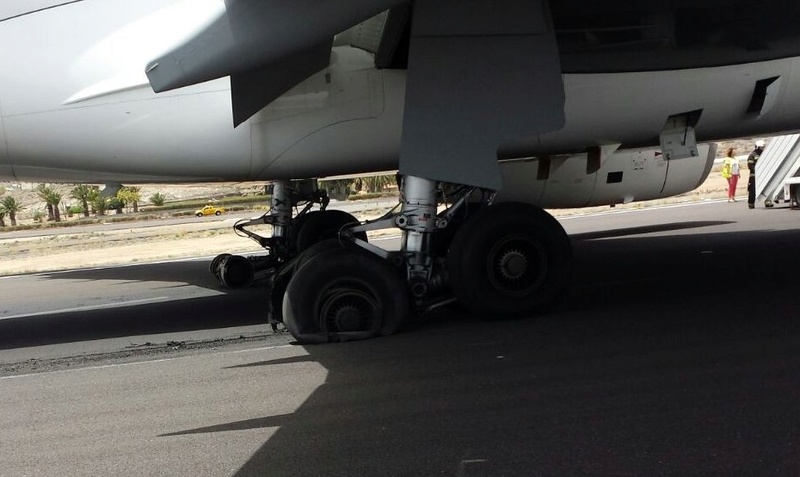 Linky shows pic of damaged aircraft at TFS on Tuesday. Tarmac damaged too. As you can see 4 tyres/wheels badly damaged. These are the wheels that touch the tarmac first followed by the 2 forward ones on the bogey on each side under the wing. According to the pilots forum there were windshear reports at TFS at the time. One bloody hard landing then.

To me it's another drama queen event, punctutre, move it, end off....

[You must be registered and logged in to see this link.]
Campbell Brodie

Yip, lost count the amount of times that ones came up in pub quiz...
Campbell Brodie

Mate and his girlfriend who are in Thursday night quiz team are quiz nuts, take it all a bit to serious, at one stage it was as if quiz master was putting a question in quiz every week about American states/state capitals, so what does mates girlfriend do, prints a list of them off for everyone in team to take home and lean,,, schoolteacher intshe...

Also at birthdays we give each other silly little presents, from them I've twice been given cups, one with the flags of the world on it the other the periodic table,,, now I don't drink tea or coffee so ain't learned much, but if they'd had thought and got me a beer glass with the info on it I'd be a feckin genius by now...